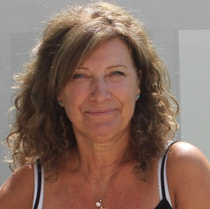 Jacinta Monks is an Irish artist with a studio in Sutton, Dublin.  She is a full time professional artist. Her paintings and drawings are a synthesis of truth and imperfection, of stillness and movement. Her influences range from Albrecht Dürer and Lucien Freud to Frank Auerbach and Michael Borremans.

Her background is multifaceted.  She first began with dress design and tailoring and then moved on to formal academic study of languages, philosophy and history of ideas, over a period of seven years.  A fluent French and Spanish speaker,  Jacinta has travelled widely in Europe.  She also has a studio in Brittany, France. Jacinta's work can be found in The Kildare Gallery, Carton House, Co. Kildare and at her studio in 'Trian', Carrickbrack Road, Sutton, Dublin 13.
​
​For the last number of years, she has been painting and drawing on a full time basis.  Jacinta honed her skills in the Royal Hibernian Academy school for four years.  Her mentors and tutors include renowned artists such as Carey Clarke, Blaise Smith, Una Sealy, Colin Martin, Conor Walton and Cian McLoughlin.

Jacinta has completed a number of commissions which include portraits and seascapes and her latest commissions were on view in her most recent sell out exhibition in The Copperhouse Gallery, Synge Street. Dublin 8 in April 2017.  Her latest exhibition will be in December 2018.

Following the death of her mother May in May 2018, there was a period of withdrawal from the whole artistic process.  However she started back in earnest with her latest body of work entitled 'Sunflower Series'.

This is a body of 12 works, mostly in oil, of varying sizes. The inspiration for this work came from the sunflowers that she planted in her garden. They flowered in abundance and a study was made from the opening of the buds to the end where they were in decay. This process was inspired by the passing of her mother.

She is due to preview her work shortly and a donation to the Hospice will be made from the sale of these highly original paintings.